Happy New Year is two distinct films rolled in one. While the first hour is breezy, fun and pretty watchable, the second hour is a convoluted mess with a heist angle that doesn’t work, a romantic track that seems forced, the vivaciousness lacking from the camaraderie of the characters and the sappyness of a dukhbhari daastan of a backstory. It is a half baked film that uses all the regular formulaic heist tools and naturally offers nothing unseen or unexpected. The predictability of the climax was the most fatal blow for the film. It isn’t unwatchable but horridly disappointing. Farah Khan has better mettle I believe and her funda of keeping it simple, garbed in floss doesn’t work this time.
Charlie (Shah Rukh Khan) is looking to avenge the humiliation of his father who was put in a wrong spot by Grover (Jackie Shroff). Following him and tracking him for 8 years led him to the momentous day when Grover will keep protected a handful of rare diamonds.
Charlie builds a team of people whom he calls Charlie’s Angels to participate in World Dance Championship which will lead them to the diamonds they want to steal. Nandu Bhide (Abhishek Bachchan), Jags (Sonu Sood), Tammy (Boman Irani) and Rohan (Vivaan Shah) along with their dance teacher Mohini (Deepika Padukone) train for the championship.
How a bunch of losers manage to sneak out the diamonds from the world’s safest locker is what the film entails. A series of events and a tight climax leads to the downfall of Grover that Charlie had plotted for 8 years.
Shah Rukh Khan looks droolworthy. I am not a fan of the Superstar but the actor’s caliber despite remaining unused in the films he takes up, he easily is one of the things in the film that keeps you latched. The role doesn’t do justice to his caliber but the SRK swagger helps in an underwhelming film like this.
Deepika Padukone is earnest and doesn’t have merely an arm candy role. Though her screen space isn’t a lot, the actress has done a terrific job.
Abhishek Bachchan is effortless and hams well. But then again, despite a lot of screen presence his character is not well invested in the film.
Boman Irani brings in his wicked humor and is immensely endearing in his role. Though a lot of the antics, Farah made him do were weird, Irani pulled it all off smartly.
Sonu Sood goes almost unnoticed and wasted. I think he shouldn’t accept such thankless roles where all he is required to do is flaunt his body.
Vivaan Shah wasn’t as much a misfit as one would have thought. He is good and blends in smoothly with the rest of the cast.
Jackie Shroff goes wasted despite his menacing demeanor. Farah doesn’t build his character into anything meaty and anyone could have easily filled in for him. Shroff doesn’t get his usual quirk because the role barely allows him anything.
It lacks Farah Khan’s witty streak. The heist track just doesn’t work and the film’s second hour is plain unconvincing. Low on the needful IQ that could have made the robbery believable, the film’s thrill tapestry was on the weaker side.
Happy New Year is a muddled mess which has its own warm moments but as a package fails to work. Three hours of Shah Rukh flaunting his abs and swagger gets too much to take minus a strong storyline. Farah Khan has redeemed Tees Maar Khan but Happy New Year is her most mediocre work. It’s a magnum opus which is pretty much hollow from within and remains an all frills, no thrills show.

Kishore Kumar was born on 4th  August 1929 and became one of the greatest Indian film playback singer, actor, lyricist, composer, producer, director, screenplay writer and scriptwriter. He is considered the most successful Indian playback singer of the Hindi film industry of all time. He sang in many Indian languages including Bengali,Hindi, Assamese,Gujarati, Bhojpuri etc,

20,000 for the film Dal Mein Kala (1964). When actor Arun Kumar Mukherjee—one of the first persons to appreciate Kishore's singing talent—died, Kumar regularly sent money to Mukherjee's family in Bhagalpur.
Many journalists and writers have written about Kishore Kumar's seemingly eccentric behavior. He placed a sign that said "Beware of Kishore" at the door of his Warden Road flat. Once, producer-director H. S. Rawail, who owed him some money, visited his flat to pay the dues. Kumar took the money and when Rawail offered to shake hands with him, Kumar reportedly put Rawail's hand in his mouth, bit it and asked "Didn’t you see the sign?". Rawail laughed off the incident and left quickly. According to another reported incident, once Kumar was due to record a song for producer-director G. P. Sippy. As Sippy approached his bungalow, he saw Kumar going out in his car. Sippy asked Kumar to stop his car but Kumar increased his speed. Sippy chased him to Madh Island where Kumar finally stopped his car near the ruined Madh Fort. When Sippy questioned his strange behavior, Kumar refused to recognize or talk to him and threatened to call the police. The next morning, Kumar reported for the recording session. An angry Sippy questioned him about his behaviour the previous day but Kumar said that Sippy must have dreamt the incident and said that he was in Khandwa on the previous day.
Once, a producer went to court to get a decree that Kumar must follow the director's orders. As a consequence, he obeyed the director to the letter. He refused to alight from his car until the director ordered him to do so. After filming a car scene in Mumbai, Kumar drove until he reached  Khandala  because the director forgot to say "Cut". In the 1960s, a financier named Kalidas Batvabbal, who was disgusted with Kumar's alleged lack of cooperation during the shooting of Half Ticket, reported to the income tax authorities, who raided his house. Later, Kumar invited Batvabbal to his home, asked him to enter a cupboard for a chat and locked him inside. He unlocked Batvabbal after two hours and told him, "Don’t ever come to my house again".
On 13 October 1987—his brother Ashok's 76th birthday—he died of a heart attack in Mumbai at 4:45 pm. His body was taken to Khandwa for cremation. Kumar had recorded his last song, Guru Guru—a duet with Asha Bhosle for the film Waqt Ki Aawaz (1988) composed by Bappi Lahiri.
Filmfare Awards
Winner:
Posted by Hits Of Bollywood at 19:47:00 No comments: 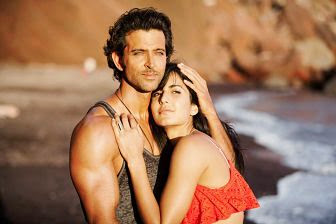 When Bollywood filmmakers remake a Hollywood film, I wish they would stick to the same duration too! Bang Bang is the Indian remake of Knight and Day, which as far as I remember, was about 110 minutes but the running time of Bang Bang is 156 minutes! For a film with no head or tail, that's quite long!
Harleen (Katrina Kaif) is a bank receptionist who lives with her grand mom-an enthusiastic woman who enters the bathroom when Harleen is having a shower to ask her why she has no boyfriends. Bored with her life, Harleen signs up for a blind date on a website. Enter trigger-happy thief Rajveer (Hrithik Roshan). He has robbed the Kohinoor from London, no less! Since her blind date has not turned up, Rajveer takes over and charms her.


Of course there are people gunning for him because he has the Kohinoor and then starts the non-sense chase, which goes on till the end of the film.
Since Harleen was spotted with him, she is in danger too so he has to take care of her and himself. So she will tag along everywhere he goes. While they are in danger they go from one place to another and also make time to sing a song at every fancy location.
There are some terrible brand placements here like Mountain Dew-the hero of the film was made to drink it; he also had to say the tag line loud and clear, Dar ke aage jeet hai!
The makers have obviously pumped in a lot of money here. From shooting in various places from Shimla to Abu Dhabi to Greece. The actors are seen using every mode of transport from speeding bikes, formula one cars, speed boat and even sea planes. If all this could make the film entertaining, the whopping budget would have been worth. There is a difference between spending money and wasting it.
Hrithik Roshan looks good and that's nothing new but don't expect any great acting here since he was just expected to run from one place to the other. Katrina Kaif was given a silly role and there was little she could do about it. Music by Vishal Shekhar is average. Some songs are catchy and shot well too but over all the music doesn't make a mark.
If your idea of a fun film is watching two good looking stars running around senselessly for two hours and thirty minutes then go and watch Bang Bang.
The makers have put in a lot of money. Is it wasted or well spent, only time will tell. I would suggest you save your hard earned money and watch Bang Bang on TV someday soon.