Firstly, Dhawan — although earnest in his portrayal as long-lost twins Prem and Raja — simply doesn’t have the star power or charisma that Khan possesses. It’s not for want of trying, but the jokes are juvenile (Sample this: Who’s the president of United States: Donald Duck or Donald Trump?)
The film begins with a smuggler getting cross with a rich businessman Malhotra (Sachin Khedekar) when he rats on him to custom officials over a bag of illicit diamonds. But the villain takes off with one of Malhotra’s newborn twins (Raja) to punish the good Samaritan.
Raja, who was an insignificant pawn in the smuggler’s avenging game, grows up on the streets of Mumbai after a random lady picks him up from the railway tracks and adopts him as her son, but Prem grows up as a sheltered son in the lap of luxury and overprotective parents in London. Prem is a diffident gentleman, while Raja gets by in life with his wits and brawn.
Everybody in Judwaa 2 overacts, and the dialogues feel like they were written by an adolescent for his high school drama.

The women, Jacqueline Fernandez and Taapsee Pannu, are on call to look pretty and be airheads with         toned bodies. While Fernandez does her bit convincingly by giggling gregariously, Pannu is a misfit and       looks lost.
Dhawan’s bronzed torso seems to be another character in this tedious comedy. When everything else fails, a shirtless action sequence or a shirtless song sequence is meant to salvage the worn-out film. Barring few jokes that land, the majority of the gags fail to evoke any emotion.
Even the physical comedy borders on the crude. And employing sidekicks with speech impediments (Rajpal Yadav as Raja’s mate) isn’t funny — back then or now.
But the reboot of the songs by Anu Malik, Oonchi Hai Building and Tan Tana Tan, are fun-filled and take you down a nostalgic route. However, a glitzy music video or a cameo by the original star of Judwaa, Khan, can’t make up for a flawed comedy.

20,000 for the film Dal Mein Kala (1964). When actor Arun Kumar Mukherjee—one of the first persons to appreciate Kishore's singing talent—died, Kumar regularly sent money to Mukherjee's family in Bhagalpur.
Many journalists and writers have written about Kishore Kumar's seemingly eccentric behavior. He placed a sign that said "Beware of Kishore" at the door of his Warden Road flat. Once, producer-director H. S. Rawail, who owed him some money, visited his flat to pay the dues. Kumar took the money and when Rawail offered to shake hands with him, Kumar reportedly put Rawail's hand in his mouth, bit it and asked "Didn’t you see the sign?". Rawail laughed off the incident and left quickly. According to another reported incident, once Kumar was due to record a song for producer-director G. P. Sippy. As Sippy approached his bungalow, he saw Kumar going out in his car. Sippy asked Kumar to stop his car but Kumar increased his speed. Sippy chased him to Madh Island where Kumar finally stopped his car near the ruined Madh Fort. When Sippy questioned his strange behavior, Kumar refused to recognize or talk to him and threatened to call the police. The next morning, Kumar reported for the recording session. An angry Sippy questioned him about his behaviour the previous day but Kumar said that Sippy must have dreamt the incident and said that he was in Khandwa on the previous day.
Once, a producer went to court to get a decree that Kumar must follow the director's orders. As a consequence, he obeyed the director to the letter. He refused to alight from his car until the director ordered him to do so. After filming a car scene in Mumbai, Kumar drove until he reached  Khandala  because the director forgot to say "Cut". In the 1960s, a financier named Kalidas Batvabbal, who was disgusted with Kumar's alleged lack of cooperation during the shooting of Half Ticket, reported to the income tax authorities, who raided his house. Later, Kumar invited Batvabbal to his home, asked him to enter a cupboard for a chat and locked him inside. He unlocked Batvabbal after two hours and told him, "Don’t ever come to my house again".
On 13 October 1987—his brother Ashok's 76th birthday—he died of a heart attack in Mumbai at 4:45 pm. His body was taken to Khandwa for cremation. Kumar had recorded his last song, Guru Guru—a duet with Asha Bhosle for the film Waqt Ki Aawaz (1988) composed by Bappi Lahiri.
Filmfare Awards
Winner:
Posted by Hits Of Bollywood at 07:05:00 No comments: 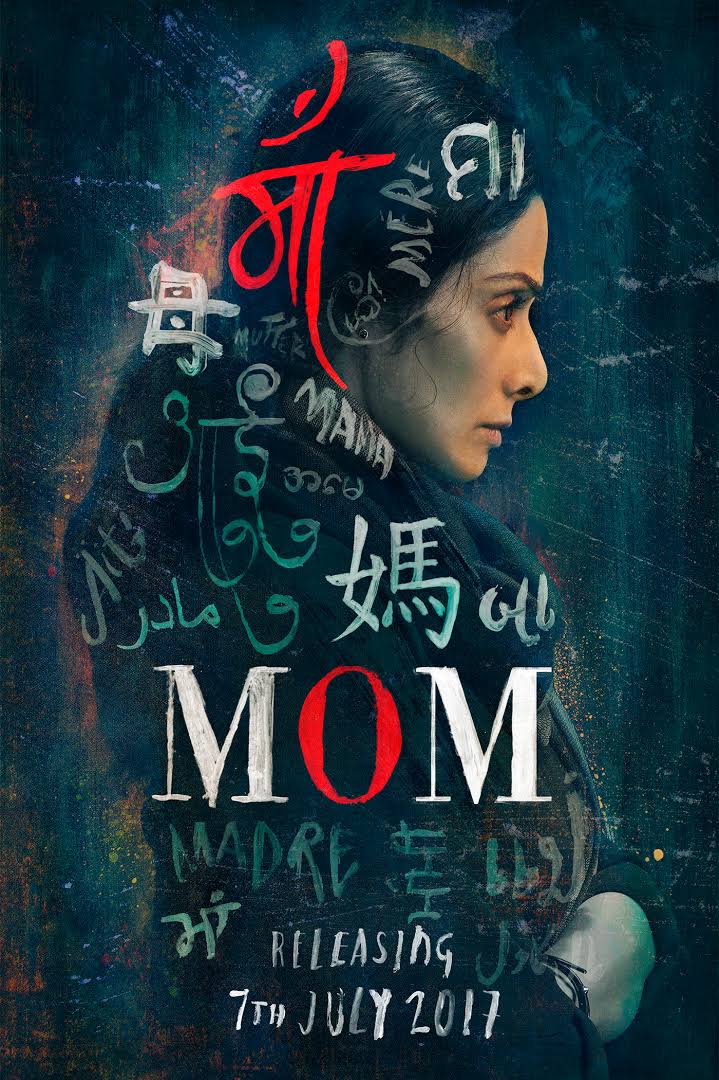 The role of a mother has always been quintessential in real life and it is reflected to be so in the movies too. There have been many films which have been made that portray strong character of the mother, the all time classic being MOTHER INDIA. This week’s release titled MOM starring Sridevi also shows the power of a mother. Will MOM be able to prove itself to be the ‘mother’ of all the films in Bollywood or will it bite the dust, let’s analyze.
It’s always said that ‘Since God cannot be everywhere, He created Mother’. MOM is a heart wrenching story, which mirrors the power of a mother in lieu of the aforementioned adage. The film starts off with school teacher Devki (Sridevi) punishing one of her students in school named Mohit for sending a lewd message to her daughter Arya (Sajal Ali), who also studies in the same class. Despite Sridevi’s love and affection towards Arya, Arya can’t get over the fact that she is her step-mom. There’s a constant brewing tension between them. One night, when Arya goes for a Valentine’s day party with her friends at a far off cottage, Mohit and his accomplices seize the opportunity to get even with her and land up brutally raping her and dumping her in a gutter. What happens after that are a series of court sessions, which ultimately end up declaring the ‘powerful’ Mohit and his partners as innocent and they walk away scot-free. Seeing justice slipping out of her hands, Devki approaches a small time detective Dayashankar Kapoor aka DK (Nawazuddin Siddiqui) to help her. Just as Devki starts ‘punishing’ the culprits, she comes under the radar of the razor sharp police officer Mathew Francis (Akshaye Khanna). What is the reason for Arya to hate Devki so much, does Devki succeed in her plan of exposing the culprits or does she get caught by Inspector Mathew Francis while doing so, what happens of the culprits ultimately and does Arya finally get justice, is what forms the rest of the story.