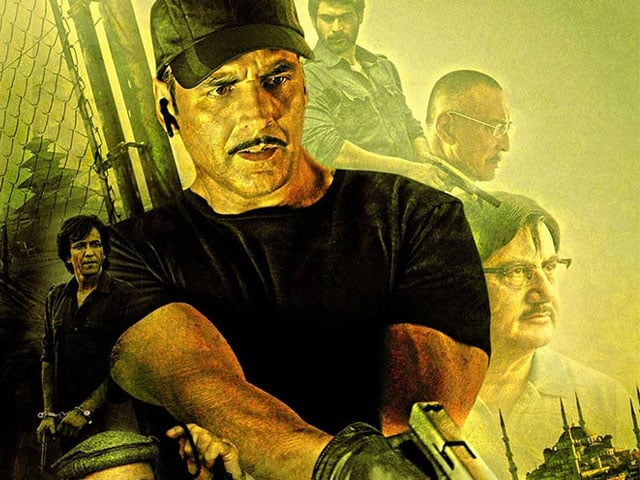 Star Cast: Akshay Kumar, Taapsee Pannu,Rana Daggubati, Danny Denzongpa, Anupam Kher, Madhurima Tuli, Rashid Naz, Kay Kay Menon
Director: Neeraj Pandey
A team of selective officers is given a five year mission termed ‘BABY’. They undergo covert operations to hunt down and kill terrorists.
One such dare devil officer is Ajay (Akshay Kumar). The movie is a story of their last mission in this 5 year plan. Alongside Ajay are other officers played by Rana Daggubati and Tapsee Pannu who join him on his operations. The head of this intelligence is Feroze (Danny Denzongpa) and it is he who narrates the entire mission.
Gripping is the word. The first ten minutes itself set the pace of this action thriller. This is a completely nail biting tale and has you hooked to it. Neeraj Pandey sets the standard really high and has a daring take at terrorism. The story is on the face and the script with dialogues such as “India ek pareshan mulk hai” and “Main religion category mein Indian likhta hoon, Capital mein!” completely bowls you over.
I truly appreciate these dialogues over forced punchlines staple to other commercial dramas. Like a typical Neeraj Pandey film, the story is well-explained and the plot is clear. He is extremely good at bringing the raw action on celluloid and also the choice of setting for the plot which moves from Nepal, Middle East, Turkey and India is well thought out.
Akshay Kumar fits the role with ease. He has always been the quintessential action hero and in this too he excels. Although I do feel, the content overpowers this film and so it’s not Akshay’s best.
Danny Denzongpa is seen after Bang Bang and he gives a power packed performance here as well. The casting being perfect, he holds his character extremely well.
Anupam Kher enters in the second half and is quite funny with his quirky character as Shuklaji.
Tapsee Pannu impresses with her action scene and shows her potential to star in films which have a heroine pulling off some action and kicking ass.
Rana Daggubati is truly like hulk in the film. He does not get a chance to talk much but then again his personality speaks volumes for his role.
Rashid Naz, the Pakistani actor, who plays the antagonist is brilliant as Maulana. You truly hate him all through the film.
What are the main elements for an action thriller? A gripping story, great actors and action sequences that give you chills. Summed up all ans that is what Baby is. Content is king here and the director’s talent of building it up is what marvels in this film.
The cinematography is excellent and the first scene itself from Istanbul is praiseworthy. Pandey knows how to call spade a spade and so the film is bold in spite of dealing with issues of India and Pakistan. After a long time Baby is a film which shows you the other side of India who is not always a peace loving nation.
The background score drives the film perfectly as it rises the tempo when a nail-biting chase is on. There is a lot of familiarity with all Neeraj Pandey films and even though his style of story telling is quite similar, it works for the content at hand.
Baby is a must-watch film with rich content. This action thriller will woo you if you are a fan of watching raw action where blood spills and guns are trotted. An honest work that dares to bare terrorism and its religious connection.
Baby is a definite watch for anyone who likes action thrillers. With an edge of the seat course of story, it is a treat with its dialogues too.
Rating - 3.5/5
Posted by Hits Of Bollywood at 05:25:00 No comments:

It’s a maverick love story on the run where Pintu saves Ditsy in Mathura. He dodges naked swords of Moochi and his men, ducks from policemen’s bullets, jumps off buildings, races and crashes his car to finally and safely bring Ditsy home in Agra. And guess what? Ditsy doesn’t say sorry or thank you but complains how she has forgotten her US visa papers back in Mathura. Er... what?? Yes, Ditsy has Mathura-to-Manhattan dreams so that she can be away from Moochi.  So you see the action conveniently keeps shifting from Agra to Mathura and back like a convenient trip to Lulu centre every weekend. And, mind you, they make sure we know we are in Agra because every shot in the city has The Taj Mahal in the background. So no matter the shot is set in a garden or on the terrace, the monument looms large. Short of putting Taj Mahal posters in the kitchen and bathroom, it’s omnipresent like it wasn’t just a monument but Burj Khalifa, visible even from Sharjah.

Pintu respects women. He really does. In an important scene, he saves a young girl from an eve teaser and in a heartbeat sings a song; ‘Main Superman, Salman ka Fan, jo le panga, kar du MAA-BEHAN!’
Even Radhika is such a sensitive character. The writers have given her so much depth. For instance, she doesn’t like peas. She likes only paneer. See such quirks. Also, there is a pensive side to her character as she loses her beloved brother in the movie. In a very emotional scene she fondly remembers her dead brother and in exactly five seconds she raps in a song, “Let’s celebrate this moment”. The writers don’t exactly tell us ‘which moment’ though! ‘My-bro-died-I-am-so-sad- moment?’
The film is full of such brilliant screenplay, like the death of Ditsy’s brother juxtaposed with an item number by Shruti Haasan.

Arjun-now-available-in-papa’s-production-Kapoor is exactly what he was in Ishaqzaade, slightly brooding, slightly intense and when nothing seems to work, just smile.
Sonakshi-now-available-in-a-new-haircut-Sinha can do such roles in her sleep. And put everyone to SLEEP too.

The real stars of the film are Manoj Bajpayee and Rajesh Sharma. They both infuse such life into their otherwise one-dimensional characters. Manoj Bajpayee is intimidating as Bahubali. What’s interesting is that both Manoj Bajpayee and Arjun Kapoor have dreamy eyes. What you do with them differentiates the stalwart from the amateur.
Tevar, ironically, lacks attitude and spunk. Watch it only for Manoj Bajpayee.