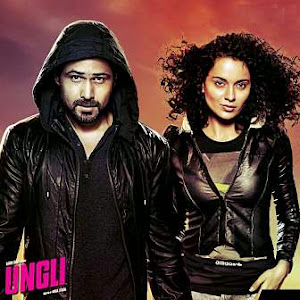 The central premise of Ungli is as unoriginal as they come: a gang of four vigilantes sets out to name, shame and tame the corrupt in the city of Mumbai after one of their own is battered in a case of road rage. In a state of panic, the police establishment deputes an upright and headstrong cop (Sanjay Dutt) to go after the masked and mysterious citizen crusaders. How hackneyed is that! Ungli , Rensil D'Silva's second film as director, is a lackadaisical thriller that gets its fingers into boiling hot water in trying way too hard to make the right noises. The screenplay (by the director himself) and the dialogues (Milap Zhaveri) are stilted. Not surprisingly, the characters are unconvincing too. And the actors - there are some competent ones in the film - are given no scope at all to rise above the morass. The plot hinges on preposterous contrivances in its bid to expose the underbelly of a rotten system that crushes the common man under its weight.Ungli does not gather any momentum because it isn't a single overarching embodiment of evil that the gang decides to take on. Instead, what the film presents are several stray faces of everyday corruption. The justice-seekers abduct the wrongdoers and take them to task in ways that are reminiscent of schoolboy pranks rather than no-nonsense sorties.The gang's targets are revealed one by one, and the quartet takes it upon itself to set things right for the victims. An old man is pushed around in the pension office and his file kept pending by clerks who do not lift a finger unless their palms are greased. A smarmy politician uses his clout to flout the law and plaster the town with ugly hoardings. A regional transport officer shells out driving licenses to all and sundry for a consideration.An auto-rickshaw man refuses to take an old lady to Andheri West unless she pays double the legitimate fare. A well-connected fixer sells plum postings to pliable policemen, besides stashing the lawmen's unaccounted wealth in a strong room in his residence. But don't large swathes of the audience know these people and their ways far better and more intimately than the makers of this film ever will?The gang of four - a television journalist (Randeep Hooda), a medical intern (Kangana Ranaut), a computer engineer (Neil Bhoopalam) and a motor mechanic (Angad Bedi) - pull off daring acts and the media gleefully laps up their pop heroism.In due course, they are joined by a rogue policeman (Emraan Hashmi), who has been thrown out of the city's bomb squad and roped into the mission to nab the Ungli gang.There is of course a back story to the foursome's decision to take the law into their hands. But, like everything else here, it is seriously wanting in credibility and depth. The rest of the film delivers a whole lot of hogwash about a compromised police force and the mounting frustration of ordinary folk who must stay within the confines of the law even when they know that the rich and powerful can bend the rules at will.With a runtime of well under two hours, Ungli is not a long film. But that does not make it any easier to sit through. Among the few positives on view, both the editing (Deepa Bhatia) and camerawork (Hemant Chaturvedi) are first rate. While the former keeps the film crisp and sharp, the latter lends it a distinctive visual feel. But much of the fine technical work is wasted because the rest of Ungli never manages to point in the right directions.Ungli has a few attributes that you will not usually encounter in a Karan Johar production. It has no big stars, no elaborate song and dance set pieces and no major love story.
Rating - 2.5/5
Posted by Hits Of Bollywood at 08:33:00 No comments: 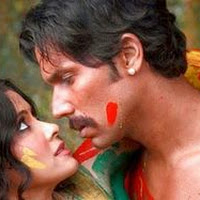 Most of us Indians are familiar with the paintings of Raja Ravi Verma, at least in the form of bright colourful calendar art. The film brings to us how colourful his life was. And the story of his life, with the central theme of an artist fighting for the freedom of his thought and creativity, is an easily relatable and timely one. In fact, the delay of 6 long years between completion and release has served the film well thematically. Of course, being a period film set at the turn of the last century, it remains visually and stylistically unaffected by the huge delay. Besides, Anil Mehta's stunning cinematography, under director Ketan Mehta's keen eye for detail, colour and design, is a treat. The climax can make any lover of freedom and art weep, the message is clear, strong, non preachy and sadly still so needed.
Randeep Hooda as Raja Ravi Verma is a great choice. He has a regal enough face (especially with that perfect nose), that can as easily look lecherous and manipulative. He particularly sparkles when he argues in court against the imprisonment of his thoughts and art and when he cruelly dismisses his muse's claim to a life outside his imagination. Randeep is so comfortable embodying the legendary painter that you believe him and want to support his fight almost all the time, except when he ages dramatically and somehow no one else around him does. And when he looks as uncomfortable as the audience in those unnecessary love making scenes.
Rating - 2.5/5

Read more at: http://indiatoday.intoday.in/story/rang-rasiya-review-starring-randeep-hooda-nandana-sen/1/399409.html
Posted by Hits Of Bollywood at 04:31:00 No comments: 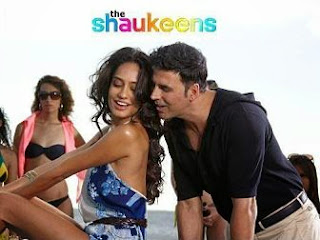 How much of the 1982 classic is this? Well, the situations have been altered but the skeletal framework of the older movie has been retained. Too bad, the beauty of the classic remains far away from this lame, unfunny story. I am not sure if it’s the script that was so bad on paper but in the translation the fun was surely lost. The idea of funny is really footling in this film. There is an elaborate sequence about discussing the sexual frivolousness of this generation by men who are well in their 60s and can’t hold their lust together. Whatever it was meant as, it did not make me laugh.
Lisa Haydon as the star struck girl is effortless but this time despite greater screen presence, she couldn’t hold through her character because of her weak character.
Anupam Kher, Annu Kapoor and Piyush Mishra are all great in their parts bringing in their caliber and experience of humor to the role but there is only little to offer when their characters are limited by a weak plot.
Surprisingly, the maximum laughs are delivered by Akshay who is thankfully in one of his best comic trips. His part did make the film a little more bearable in the second half.
The Shaukeens is a lame, dunce, dis-satisfactory and a stupid film at its core that is so tedious and flat that you almost abhor your time at the cinema. If you can tolerate 30 minutes of Akshay Kumar making fun of himself and his colleagues by making funny faces, you can take a trip for this. But for me, it was a disappointing story of how we lost an intelligent filmmaker to fat paychecks from fancy production houses.
Rating - 1.5/5  Review  Courtesy  - KoiMoi
Posted by Hits Of Bollywood at 04:24:00 No comments: