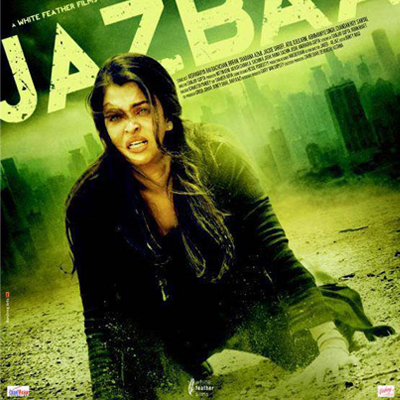 JAZBAA starts off with the introduction of the super fit and health conscious Anuradha Verma (Aishwarya Rai Bachchan), who is Mumbai's topnotch criminal lawyer with a cent per cent success track record. She also happens to be a single mother to her darling daughter Sanaya (Sara Arjun). And the reason for her to be a single mother is because she got separated from her husband and her in-laws because they wanted a son instead of a daughter. Needless to say that, Anuradha Verma happens to be extremely close to her daughter Sanaya. One day, during Sanaya's annual sports day meet, she gets kidnapped in broad daylight. Rather than asking for ransom money, the kidnappers lay a condition that they will release Sanaya only if Anuradha Verma fights the case of the dreaded criminal Nayaaz (Chandan Roy Sanyal) and free him from the jail. Left with no choice, Anuradha starts collecting evidence from all the sources possible in order to free Nayaaz, the very man who has raped and murdered Sia (Priya Banerjee), the daughter of the respected college professor Garima Chaudhary (Shabana Azmi). Amidst all this, there exists the 'street-smart cop' cop Yohaan (Irrfan Khan), who has been suspended off his services by the Anti Corruption Bureau on the basis of corruption charges against him. When all his repeated requests to his 'good friend' Anuradha Verma in order to fight his case yields no results, he suspects something amiss in Anuradha Verma's life. Despite her warnings and requests, Yohaan gets into Sanaya's kidnapping case. Being her true friend and her secret lover, he stands by Anuradha like a rock. Does Yohaan become successful in freeing Sanaya from the dreaded kidnappers, who are the kidnappers and in what way are they connected with the rapist cum murderer Nayaaz, does Anuradha Verma manage to find her daughter Sanaya and what ultimately happens to the 'unspoken love' between Anuradha and Yohaan…forms the rest of the story. Despite the 'towering' presence of the master performer Irrfan Khan, Aishwarya Rai Bachchan with her 'initially-rusty-later spellbinding' performance, carries the film on her shoulders. Her 'comeback' performance in JAZBAA can undoubtedly be defined as one of her best till date. She makes an impressively stunning impact, conveying a gamut of emotions with utmost conviction and aplomb. Full marks to Sanjay Gupta for capturing (read 'extracting') a raw and stunning performance from her. Besides looking beautiful and stunning, she also holds a strong screen presence. The interval scene when she spots her daughter but is unable to rescue her, shows Aishwarya's talent as an actor. JAZBAA can be termed as Irrfan Khan's first main lead hero performance in a mainstream commercial film. His screen presence, when added to his delivery of one-liners takes the film to a different level altogether. Irrfan Khan mouthing his set of one-liners (in his impeccable trademark style) are whistle and clap-worthy. The veteran actress Shabana Azmi, on the other hand, comes up with yet another stellar performance in JAZBAA. She lights up the screen with her glowing presence in the film and shows her true potential, especially towards the climax sequences. Other actors like Jackie Shroff, Priya Banerjee, Siddhant Kapoor, Chandan Roy Sanyal and Atul Kulkarni excel in their respective roles.

While the film's music (Amar Mohile) is not very massy, it is the film's background music that keeps the film gripped throughout. The film's editing (Bunty Negi) could have been a bit better in order for the film to look sleeker. The film's cinematography (Sameer Arya) is decent.
On the whole, JAZBAA is a captivating thriller with good performances that make it a decent one-time watch.