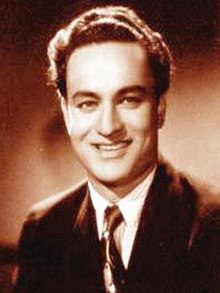 Mukesh Chand Mathur was born on 22 July 1923 in Delhi. Amongst the numerous nominations and awards he won, his song "Kai Baar Yuhi Dekha Hai" from film Rajnigandha (1973) won him the National Film Award for Best Male Playback Singer. Mukesh is also popular as being the voice of legendary actor Raj Kapoor.
He got his break as a playback singer for actor Motilal in 1945 with the film Pehli Nazar with music composed by Anil Biswas and lyrics written by Aah Sitapuri. The first song that he sang for a Hindi film was "Dil Jalta Hai To Jalne De".