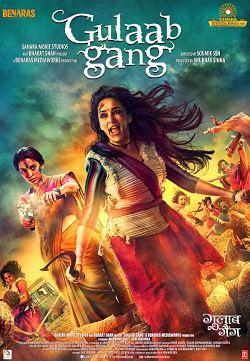 While pitting two former contemporaries against each other in a battle over good versus evil does guarantee undivided attention, it unfortunately doesn’t translate into good cinema.

Debutant director Soumik Sen’s casting coup is wasted in a story heavily inspired by an all women gang of social crusaders called Gulaabi Gang. Although Sen steers away from turning it into a documentary, he liberally borrows real-life references from their pink revolution and guns for box-office glory without ever acknowledging their movement.

It’s when the credits roll, at the end of two-hours-and-twenty-minutes, that you wish he had been man enough to give more insight into their journey. Instead, he lists out a number of unknown faces whose sacrifices and contributions have apparently empowered women and colours them pink.

Those last few minutes of testimonials as the curtains roll down are probably the most important moments of ‘Gulaab Gang’. And that’s the failing of the moviemaker, who probably got distracted by the various roles – storywriter, screenplay, music and direction –he took on for his maiden venture.

We are introduced to the innocent world of Rajjo through the voice of Anil Kapoor, who narrates her struggles to get educated in Madhavpur village, where girls are taught to cook and clean, and not the alphabets.  She fights the stereotype and her abusive step-mom’s attempts to break her, emerging stronger and powerful.

Apart from tackling social staples like dowry and rape, much like Bollywood’s earlier testimonials of women crusaders, Sen’s gang also focuses on electricity and water. They block out a group of corrupt government officials in a bid to light up their village. That, we learn later, is based on true events.

Their work shifts into the election battle field, when Rajjo takes on political leader Soumitra, who everyone refers to as ‘madam’. The rest of the movie is about their fight to victory, and of their varying outlook on social reform and reward.

Sen’s efforts, however, would have been far more rewarding if he had stopped indulging his Madhuri fixation. Making her dance in synchronized poetic moves, and even giggle when her student blurts out a reference to her iconic ‘Ek,Do,Teen’ dance number, ruins the impact of the person she’s portraying.

Despite this flaw, Madhuri fleshes out Rajjo’s persona with grit and substance, and is earnest in her efforts to lead her girl gang. Whether it’s her dancing, or singing (she debuts with a song), or her fighting, Madhuri gives it her all.  It’s regrettably the superficial outline of her character that leaves her misplaced.

This, however, works in favour of Juhi, who emerges far more influential and striking as the conniving politico head ‘Madam’. Devoid of any references to her earlier Bollywood image, Juhi sticks to her character, and brilliantly plays her various insecurities and her determination to strike out anyone in the race to political glory.

And this, despite being given a role that’s got far less prominence on the script than rebel frontrunner Rajjo. Although the character could have appeared jaded, Juhi plays it with impeccable restraint and concentrates on her wavering temperament with incredible flair, making this her most significant performance to date.

The supporting cast of fairly unknown names are impressive, especially Rajjo’s two loyal soldiers. Even though ‘Gulaab Gang’ has so much going for it, it fails to win our applause.
Posted by Hits Of Bollywood at 03:24:00