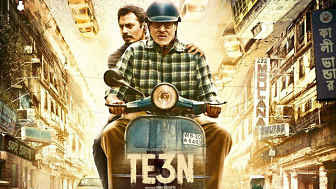 The film starts off with a flashback event featuring Inspector Martin (Nawazuddin Siddiqui) and John Roy (Amitabh Bachchan). This is then followed by the religious daily visit of John Roy to the police station to meet Inspector Sarita Sarkar (Vidya Balan), regarding the kidnapping and killing of his granddaughter Angela Roy. The story then oscillates between the past and the present. Amidst all this, there also exists the story of the guilt filled Inspector-turned-Priest Martin Das, the very man who was in charge of Angela Roy's case. While the police department (including Inspector Martin Das) gives up totally on the Angela Roy's case, John Roy simply refuses to do so and vows to his wheelchair ridden wife that he will not take rest until he nails the innocent Angela Roy's dreaded kidnapper and murderer. Around 8 years later, there occurs a kidnapping of a school going kid Ronny. The mysterious part about this kidnapping is that, it is totally similar to that of Angela Roy. That's when the trio of Father Martin, Inspector Sarita Sarkar and John Roy set out to search the masterminded smart criminal. While Father Martin and Inspector Sarita Sarkar go the legal way, John Roy, despite his old age sets out on his own to nab the criminal. What happens after that are a series of twists and turns, which ultimately leads to a shocking revelation in the end. Does John Roy fulfil the promise that he had made to his wife, do Father Martin and Inspector Sarita Sarkar become successful in nabbing the culprit and what is the shocking revelation in the end is what forms the rest of the story.
As for the performances, TE3N boasts of three powerhouse performers in the form of Amitabh Bachchan, Nawazuddin Siddiqui and Vidya Balan. Besides being proficient as ever, Amitabh Bachchan is totally 'in his character' and in top form. But the weak script does him in, in a couple of places. Nawazuddin Siddiqui comes a close second with his cop-turned-father act, but lands up being underutilized. The audiences who will go to see the film expecting the antics of Nawazuddin Siddiqui (like in BADLAPUR or BAJRANGI BHAIJAAN) will be sorely disappointed. Despite the fact that he tries to elevate his character, the weak script fails him too. Vidya Balan, on the other hand, lands up doing a 'guest appearance' in the film. Her portrayal of being a razor sharp policewoman required a bit more conviction (and scenes, in that order). On the whole, she does land up doing a decent job, if not a superlative one, something that is expected of her always. The other actors help the film move forward. The film's music (Clinton Cerejo) is extremely delightful, with tracks like 'Haq Hai', 'Rootha' and 'Grahan' standing out. The film's background music (Clinton Cerejo) is reverberating and helps in the film's progress. While the film's cinematography (Tushar Kanti Ray) is good, it's editing (Gairik Sarkar) could have been tighter which definitely would have worked in the favour of the film. On the whole, TE3N, despite being a whodunit thriller, suffers extremely because of its slow pace and weak screenplay. At the box-office it will be unable to connect with its target audience.